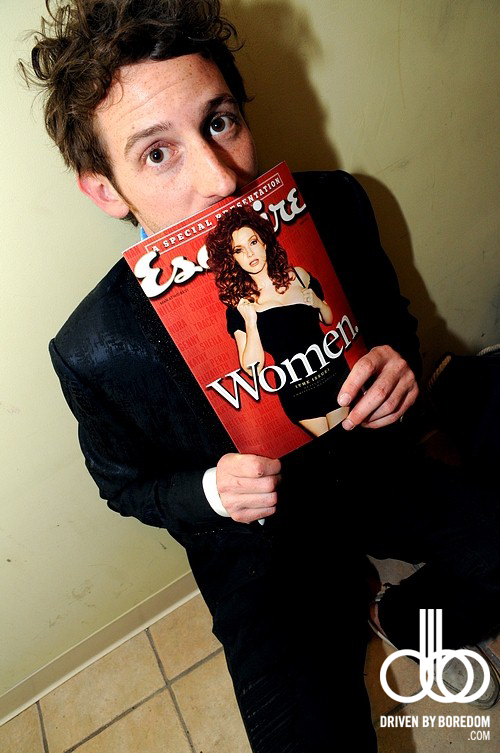 Who are you? My name is Brendan Jay Sullivan. My writing appears in Esquire in the states and L’Optimum in France. My first book TEXTS, DRUGS & ROCKNROLL will be out next year. I live in Brooklyn, New York and tour under the name DJVH1.
Why did you apply? I was lucky enough to be the first Pentales Hemingway Fellow.  A friend of mine encouraged me to apply.  But I wasn’t sure when I would have time to be in Berlin for four days anytime soon.
Why did I accept?  That same friend went on book tour a week later in East Germany and got really homesick.  So I flew out to see her and on my way to the airport I called Louisa and asked if the Hemingway Room was still available.

My,’ she said. ‘We’re lucky that you found the place.”
“We’re always lucky,’ I said and like a fool I did not knock on wood. There was wood everywhere in that apartment to knock on too.”

When did you come?  The next night!  It worked out perfectly.
What did you do in Berlin?  I ate so much currywurst.  Breakfast, afternoon snack.  Every morning I got up with the city and wrot
e in perfect peace in the apartment.  Getting a change of scene really helps your writing.  You see minor differences and then when you sit down to write you think, “What if I had never seen this street before, how would I describe it to someone else who’d also never seen it?” Or, “What would I see on this street that someone who grew up on it might not notice?”  Then I had a perfect Berlin weekend at the clubs and I made some great friends and heard some great music.

What did you think of the project?  I just wish there were people like Louisa with big hearts and insatiable curiosity all over the world.
What did you work on whilst in berlin?  My new manuscript is titled DON’T LOOK DOWN.  It’s about a kid who works in an art museum.  He’s trying to learn Kurt Vonnegut’s famous “Eight Rules of Creative Writing” by applying them to his life.  Each chapter is him learning or failing to learn one of the rules:
-Kurt Vonnegut, introduction to Bamgombo Snuffbox: Uncollected Short Fiction 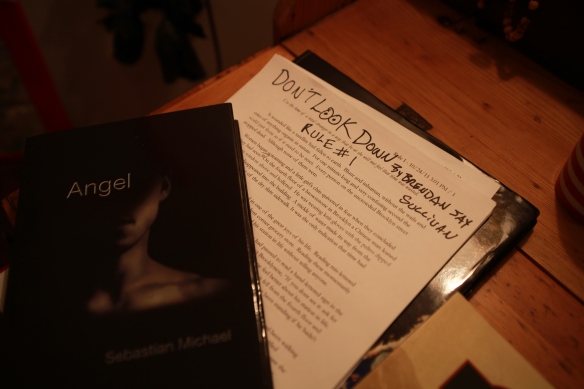 Best moments: There was a dinner in the house my second night there.  Great food and such nice people.  Some of them I had met out the night before through friends and it was just such a wonderful way to feel at home in Berlin.  When I think about that night, I just have this warm, candlelit glow of us all having a nice spaghetti dinner together. 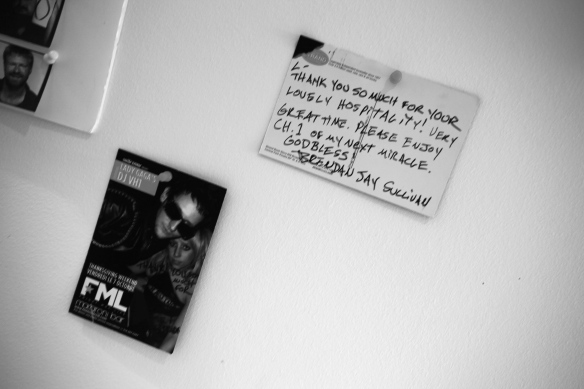 Worst moments: None!  Remember what I said? CURRYWURST!  I’ll use this space to list even more best moments: I crashed Anna Borowy’s art
opening and she signed a print for me.  Thai food at Goodtime, beers at Ankerklause on t
he river, picking broken glass out of my drink at King Size in Mitte, dancing at Watergate with my new friend Kika.
Conclusion- Berlin is: Awesome!  Anyone who is lucky enough to see it from the warmth of the Pentales Hemingway Room should knock on wood.  I felt as lucky as Hemingway did when he came home that cold day and first told his wife that he’d met Sylvia Beach at Shakespeare and Co: